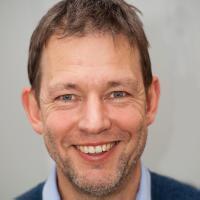 I am currently team leader for a group of 12 scientists, 11 phd’s, three technicians and ten master students applying molecular techniques in microbial ecological studies. My research focuses on social interactions in microbial populations. My group’s studies evaluate the extent of genetic flow within natural communities and their response to environmental perturbations.

The section houses state of the art culture independent experimental infrastructure that enables us to examine how microbes interact at a scale that is relevant for such small organisms and to examine and identify the roles of the individual species that contribute to these interactions.

We investigate how microbes work together in in their natural state such as biofilms and the effect this has on microbial communities in in vivo systems such as human or animal gut, soil, or phase change communities. These are related to our in vitro model systems such as our bioflux biofilm system where we can evaluate our findings and examine phenomenon such as horizontal gene transfer or emergent community properties and evolutionary strategies. To do so we use techniques such as high throughput sequencing, flow cytometry and ultra-high resolution bioimaging or confocal microscopy and microbial reporter systems.

The pioneering work of the section has had been recognized for its impact in diverse areas in which microbial interactions are critical. These include, Soil biodiversity and bioremediation, the role of horizontal gene transfer, human disease progression, the effects of species diversity in plant animal and environmental microbiomes, how microbes interact in evolutionary strategies and the significance of cooperation verses antagonism in microbial systems.

Working in these areas necessitates close collaboration with international scientists from around the world that come to the section and to whom members of the section visit in scientific exchange programs. They span all corners of the globe including Dr. Duncan Veal, Macquarie University, Sydney Australia, Prof A. Spormann, Stanford University, Prof. S. Kjelleberg, University of NSW; Prof. M. Schloter, Helmholtz Zentrum München; and Prof. Md Hans Bisgaard COPSAC back here in Denmark.

These collaborations have helped more than 20 postdocs and 30 past Ph.D. fellows follow their career path both here and around the world to obtain successful positions in both academia and research.

2005 – ongoing   Professor at Institute of Biology, University of Copenhagen

2006 – ongoing   Member of the Institute of Biology’s research committee

2006 – ongoing   Deputy at the Faculty of Science’s research committee

2001 – ongoing   Scientific member in Microbiology of The Environmental Appeal Board

1992 – ongoing   Referee at all major journals within Microbiology