The beginning of the end of unbridled sugar cravings?

Obesity is by all means a growing problem. In a new study, researchers from the Department of Biology have characterized a biological mechanism that can possibly be used to fight obesity by toning down the urge to eat sugar and up regulating the desire to consume nutritious food.

Humans are biologically coded to love sugar, but it's obviously not smart just to eat sugary foods until we crack. But what exactly makes us stop?

A research group from the University of Copenhagen, led by Kim Rewitz, has tried to answer this question by uncovering the function of a certain intestinal hormone in fruit flies, which helps to regulate appetite. The fact that the banana fly is even interesting as a model in this context is because the banana fly's gut hormone is very similar to the PYY hormone found in humans and other mammals.

Professor Kim Rewitz explains: "In short, our results show that this intestinal hormone in fruit flies functions as a kind of 'sugar brake' - a biological mechanism that must prevent the individual fly from unrestrained filling up with sugar at the expense of other nutrients. And this is, with some probability, also how PYY - the mammalian version of the corresponding hormone - works as well".

The promising results have just been published in the highly regarded scientific journal Nature Metabolism. Read the article here 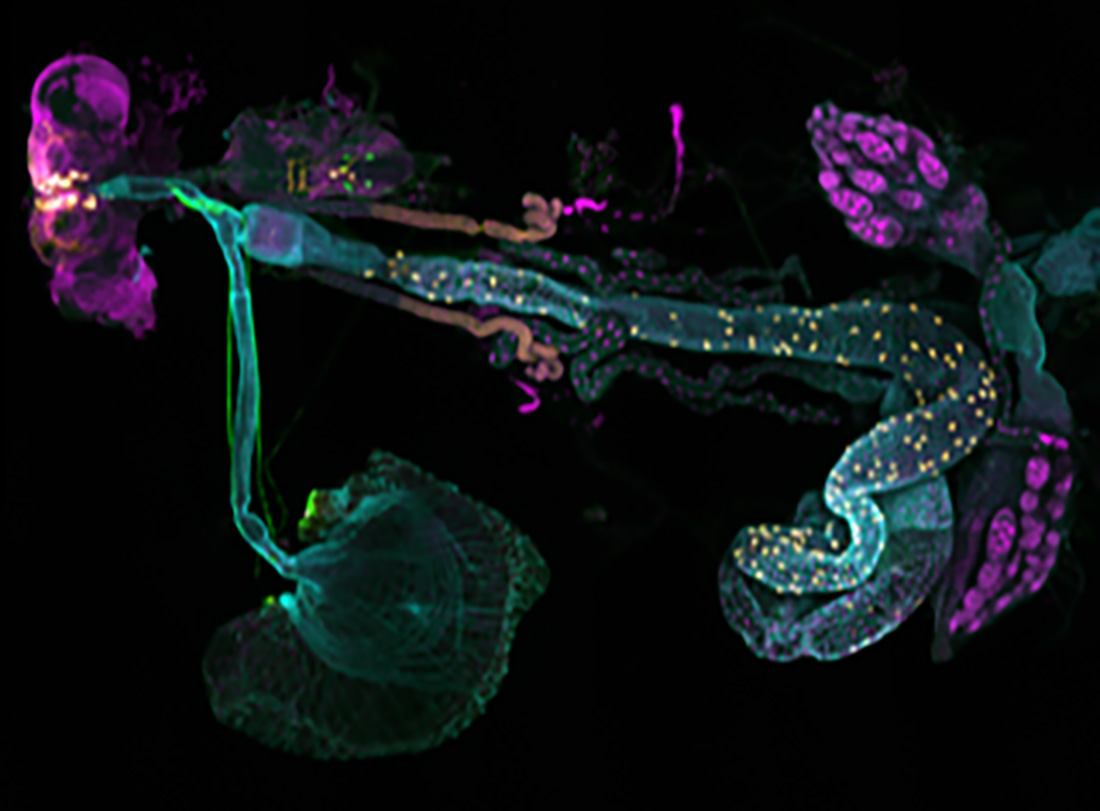 Small-scale surgery on the insides of a fruit fly

Researchers at the Department of Biology at UCPH used a special postmortem technique to remove the brain, entire central nervous system, entire gut and reproductive organs (i.e. the ovaries) from a female fruit fly, a mere three to four millimetres in length.

Everything was removed as a single, connected organ system – something which, as far as is known, has never been done before.

The organ system was then stained with fluorescent agents, enabling the researchers to see the various organs and relevant cell types on a microscopic image. The image is created using a scan taken with a so-called confocal microscope.

The yellow dots on the image represent the NPF gut hormone. This hormone is the fruit fly’s “sugar brake”, and NPF is extremely similar to the PYY gut hormone found in humans and other mammals.