What is going on in the coral food web?

The sources of energy and nutrients on coral reefs are scarce and heterogeneously distributed, making the competition for available prey fierce. In a new study, marine biologists from UCPH have documented how the feeding behaviour of some small fishes have evolved to feed on apparently barren sand patches commonly found between the corals in many reef habitats. 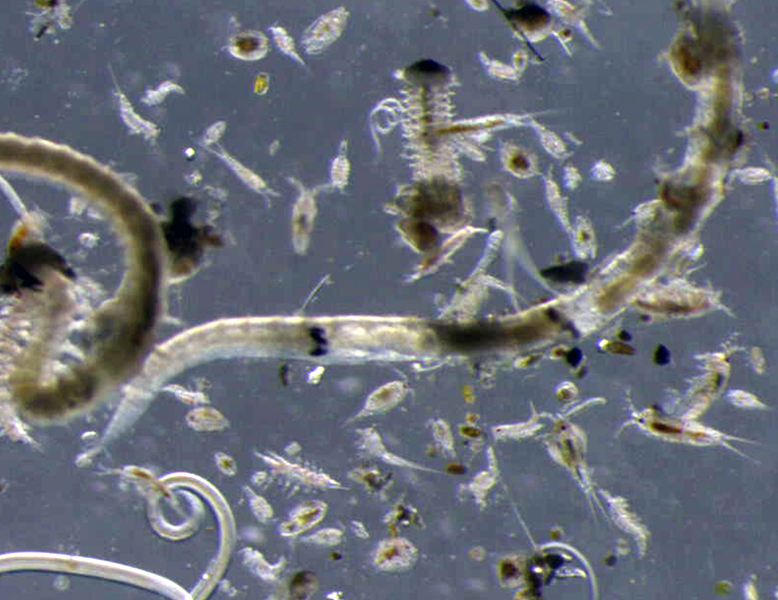 The sand patches intertwining the tropical coral reefs harbour a diverse and productive community of tiny (microscopic) invertebrates (called meiofauna), as well as small fishes that feed by taking in entire mouthfuls of sand to extract small prey (known as sand-sifting). Until now, little was known about how these sand-sifting fishes affect their microscopic prey and which specializations enable them to do so.

In an international collaboration, researchers from the Department of Biology, University of Copenhagen, set out to experimentally investigate the feeding behaviour of the two small tropical fishes, blueband goby (Valenciennea strigata) and sixspot goby (Valenciennea sexguttata).

- “Our study documents how these fishes’ feeding behaviour impacts the abundance and diversity of their meiofaunal prey, and how they can extract them from the sand. During aquarium experiments, both goby species drastically reduced the abundance of meiofauna by up to 46 %. The fishes especially reduced the number of copepods and segmented worms, but did not affect the overall diversity”, explains Ole Brodnicke, PhD-student at the Department of Biology and one of the lead authors of the study.

Furthermore, the fishes seem to be selecting prey by size, shape and density of prey items and can efficiently separate meiobenthic prey from heavier inorganic particles (sand). This feeding behaviour and specialised morphology enables access to an otherwise inaccessible trophic niche of microscopic prey.

- “Our morphological work, using advanced imaging techniques, revealed that the sand-sifting gobies have anatomical features in their mouths (including protruding taste buds) that help them to detect, separate and retain their microscopic prey from the sand. Their feeding behaviour and specialized feeding structures enable sand-sifting gobies to exploit a productive and abundant prey source, which few other fish can access”, says the other lead author, Camilla Hansen, former master student at the Department of Biology.

This function of acquiring sand derived energy supports the fast growth of these fishes, which have short lifespans due to high predation-imposed mortality by other fish. The findings of the study suggest that these sand-sifting fishes appear to be morphologically specialized for feeding on tiny invertebrates in the sand and, in doing so, efficiently transfer energy through the coral reef food web from microscopic prey to larger fish predators. Ultimately contributing to the high productivity of coral reefs.

Ole Brodnicke, says: “I believe that this study can bring research focus back to the bottom of the marine food web. Before we started this study, we did not even know if these fishes were able to eat microscopic prey, and we were highly surprised by the efficacy of how they can separate the tiny invertebrates from the indigestible sand”.

- Katrine Worsaae, group leader and last author of the study, finalizes by adding that their findings might have a broader perspective: ”Extrapolating from this study, we suggest that microscopic invertebrates also constitute prey for small or young fishes across other marine habitats beyond coral reefs and wonder whether morphological adaptation enabling sand-sifting behaviour is also more common across marine ecosystems”.